If you need to position a touch Motown on your ears, the Kickstarter marketing campaign for Ascape Audio’s newest Detroit-designed completely wired-free earbuds and charging case has in the finally launched. The pitch is as follows: The AmpPack is a charging case that holds and charges the AscapePod absolutely wireless earbuds. The AmpPack robotically starts charging the twist-to-lock earbuds as soon as you comfortable them into the cradle near your cellphone’s earpiece. The case’s inner battery has sufficient power to charge them 20 times, or, it could double the existence of your phone battery.

Ascape appears quite assured that the earbuds might not fall out – simply look ahead to the backflips within the campaign video – however if they do, the SoundFlow app can track their location from up to at least 1,500 toes (457 m) away. If that also does not assist, the enterprise says it’s going to update them for US$20.

Ascape says the SoundFlow is designed to deliver excessive quality sound with deep lows, crisp highs and clean mids, and this is pushed by means of a graphene membrane. Battery-wise, the company claims the buds will last as long as 8 hours on a single charge, and may be fully topped up in much less than 1/2 an hour. 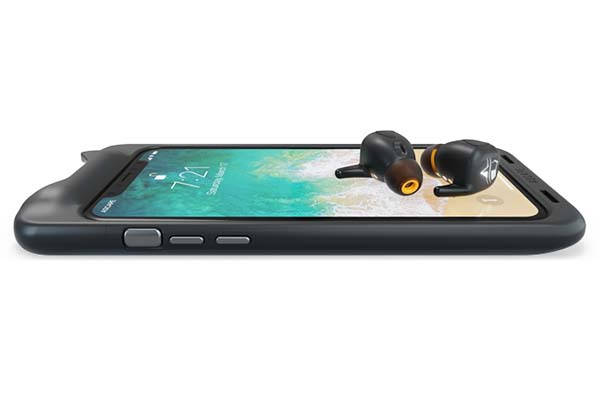 When it’s time to charge them, the earbuds can be tucked into the top of the SoundFlow SmartCase. A range of models means it will fit most new or recent phones from Apple, Samsung and Google, and boasts a battery capacity of between 2,600 mAh and 3,750 mAh depending on the model. The case can not only charge the buds but the phone too, and its sturdy design helps protect it from drops. The case itself can be juiced up through either USB-C or a wireless pad.

And if you don’t need a phone case, the final piece of the puzzle is the PowerDock. With a 1,000 mAh battery, this small device will charge the earbuds up to six times over before needing a top-up itself.

If you want a more hands-on experience, throwing $4,999 at Ascape’s campaign will get you ten AmpPacks plus you’ll help weigh in on case design (including color choice) and you’ll get to go backstage at the team’s launch party and concert this July. More than that, you’ll help test the first production units and get to tour Ascape’s headquarters in Detroit.

Assuming Ascape reaches its $75,000 campaign goal, the team expects the AmpPack to ship this November.